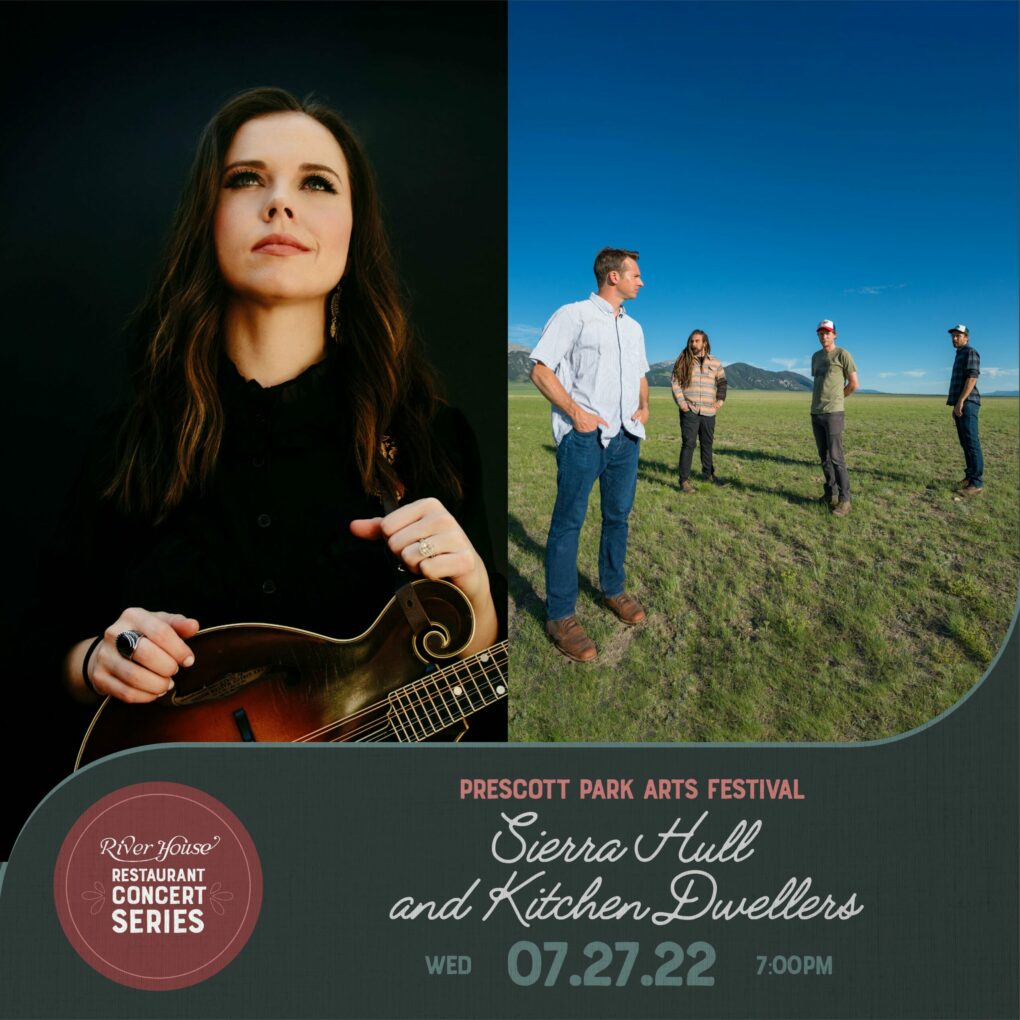 Sierra Hull’s positively stellar career started early. That is, if you consider a Grand Ole Opry debut at age 10, called back to the famed stage a year later to perform with her hero and mentor Alison Krauss to be early. She played Carnegie Hall at 12; at 13 signed with Rounder Records and issued her debut, Secrets, and garnered the first of many nominations for Mandolin Player of the Year. She played the Kennedy Center at 16 and the next year became the first bluegrass musician to receive a Presidential Scholarship at the Berklee College of Music. As a 20-year-old, Hull played the White House.

It’s only a two-hour drive to Nashville from her tiny hometown hamlet of Byrdstown, Tennessee. Hull credits her family for paving the first few miles to Music Row. Her mother, holding her as a toddler, taught her to sing. She ran next door to hear Uncle Junior pick mandolin, and listened intently to the church choir on Sundays. Her Christmas gift- a full-sized fiddle- proved too daunting. While waiting for a smaller replacement, her father showed her some notes on the mandolin. Hull was hooked, soon known as the eight-year-old wowing the locals at bluegrass jams.

She found inspiration in Krauss, Ricky Skaggs, and Sam Bush. And, just as importantly, affirmed her own sense of identity in the album covers of Rhonda Vincent, the queen of bluegrass. She heard the words of her parents, prepping her for life’s big moments yet to come, repeatedly instilling the mantra: Hard work, more than anything, will get you somewhere. It certainly did.

In 2010, Hull captured her first IBMA award for Recorded Event of the Year. She was shedding the prodigy tag, turning virtuoso, and releasing her second album, Daybreak, with seven of her own original compositions. In Byrdstown, she hosted an eponymous annual bluegrass festival.

“There’s a voice in the back of my head telling me to keep working, to keep moving forward,” Hull says. “You have to keep progressing and introducing new things.”

By 2016, Hull had reached a more mature place in her life and in her art. She tapped legendary bluegrass musician Bela Fleck to produce her third album, Weighted Mind. A departure from her opening pair of records that blended progressive elements with traditional structure, Hull let go of whatever preconceptions existed- both hers and those of her audience- and birthed a Grammy-nominated masterpiece.

“I created from a more vulnerable, honest place by asking myself what kind of music will I make if I’m not at all concerned with genre,” says Hull. “What do I want to say with my music? What do I want to feel when I stand onstage and sing these songs? I needed to have a deeper connection.”

Enlisting bassist Ethan Jodziewicz (and Fleck on two cuts), and harnessing vocal contributions from Krauss, Abigail Washburn, and Rhiannon Giddens, Hull trusted her foundation of influences to support this artistic leap. Months later she was taking home the Mandolin Player of the Year. After a near-decade of consecutive noms, Hull broke that last glass ceiling, becoming the first woman to win the prestigious title. Of all the numerous awards and achievements Sierra Hull has earned, that one occupies a special place on the mantel. Then she took home a pair to join it, winning again in 2017 and 2018.

Hull has maintained a rigorous touring schedule, as well. Even when off the road, she is frequently guesting with friends and legends, joining such icons as the Indigo Girls, Garth Brooks, and Gillian Welch, and performing at the Country Music Awards with Skaggs, Brad Paisley, and Marty Stuart.

She says she’s ready, now, for something new. Currently in the midst of work for the follow-up to Weighted Mind, her next album will consist of all original songs. Beyond that, there are tantilizing ideas she won’t divulge for collaborations and, perhaps, an all-instrumental record. There is a plan, but not a timetable, which is just fine.

“I love playing music. It’s all I ever wanted to do. I don’t see it, necessarily, as a bad thing that I’m slow to make albums. I want my albums to be something I can be proud of.”

Kitchen Dwellers twist bluegrass, folk, and rock through a kaleidoscope of homegrown stories, rich mythology, American west wanderlust, and psychedelic hues. The Montana quartet — Shawn Swain [Mandolin], Torrin Daniels [banjo], Joe Funk [upright bass], and Max Davies [acoustic guitar] — have captivated audiences at hallowed venues such as Red Rocks Amphitheatre and performed alongside everyone from Railroad Earth and Twiddle to The Infamous String Dusters in addition to playing festivals such as Northwest String Summit, WinterWonderGrass, and more. They’ve released two critically acclaimed albums — Ghost In The Bottle [2017] and Muir Maid [2019] — and a live record, Live from the Wilma [2021]. In the middle of the Global Pandemic, they broke up 2020 with an EP of Pink Floyd covers entitled Reheated, Vol. 2. It was heralded by a two-night livestream concert, Live From The Cabin, beamed out to audiences from the Bridger Mountains. Additionally, they appeared at the Live From Out There virtual festival and even took over a drive-in movie theater for an in-person gig in between regular writing sessions together throughout the year. After amassing 5 million-plus streams, selling out shows, and receiving acclaim from Huffington Post, Relix, American Songwriter, and more, the group brings audiences back to Big Sky Country on their third full-length album, Wise River, working with Cory Wong of Vulfpeck as producer.

Make a Reservation for Sierra Hull and Kitchen Dwellers