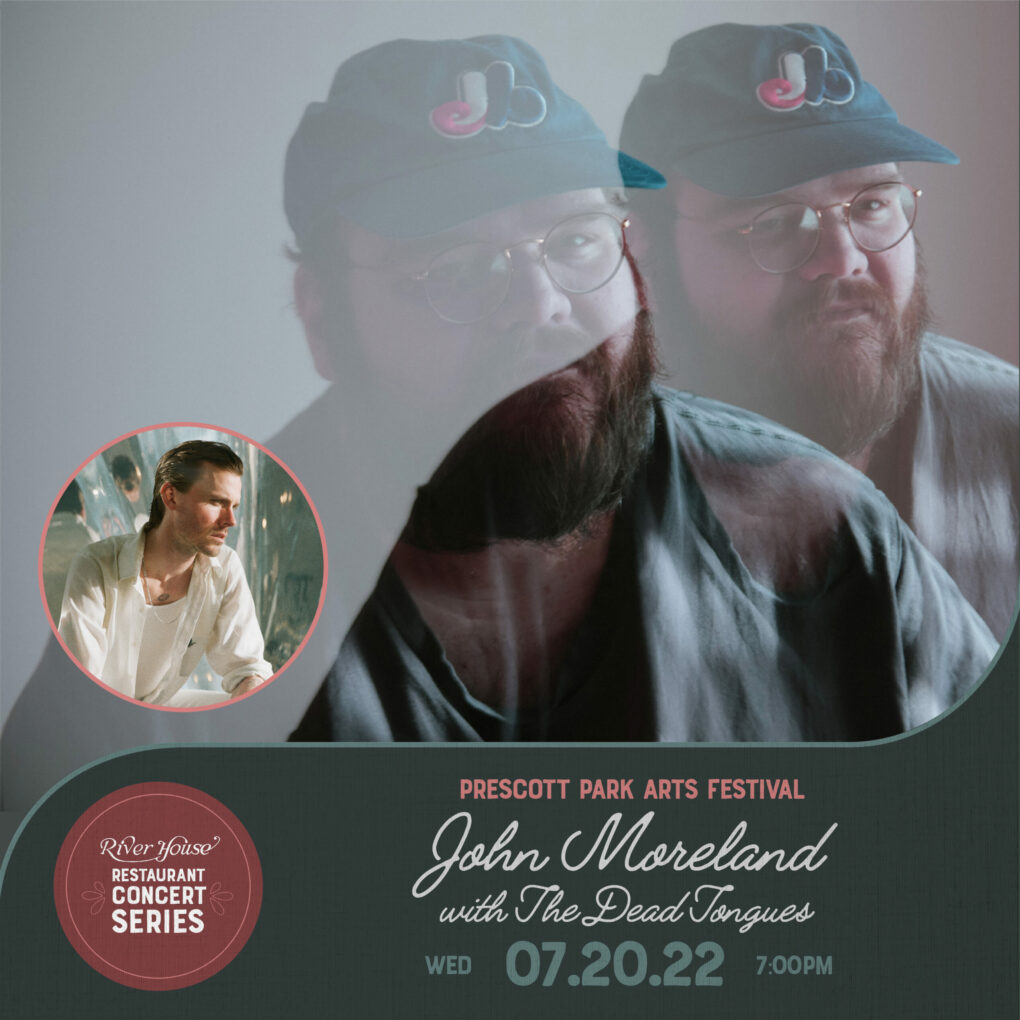 John Moreland with The Dead Tongues

John Moreland doesn’t have the answers, and he’s not sure anyone does. But he’ s still curious, basking in the comfort of a question, and along the way, those of us listening feel moved to ask our own. “I don’t ever want to sound like I have answers, because I don’t,” he says. “These songs are all questions. Everything I write is just trying to figure stuff out.”

Moreland is discussing his new album Birds in the Ceiling , a nine – song collection that offers the most comprehensive insight into the thoughts and sounds swimming around in his head to date. A compelling blend of acoustic folk and avant – garde pop playfulness, Birds in the Ceiling lives confidently in a space of its own, enriched by tradition but never encumbered by it. The songwriting that has stunned fans and critics alike since 2015’s High on Tulsa Heat remains potent, while the sonic evolution that unfolds on the record feels like a natural expansion of 2020’s acclaimed LP5 .

The New Yorker , Pitchfork , Fresh Air , Paste , GQ , and others have embraced Moreland’s meditative songs, while performances on The Late Show with Stephen Colbert , CBS This Morning , NPR Tiny Desk Concert , and more have introduced Moreland to millions. And yet, while the Tulsa – based Moreland is grateful for the respect and musical conversation he’s now having with people around the world, he is also more focused on the idea of just talking to one person – – or even himself. “Through the years, I’ve felt like I ’ m increasingly talking to myself in my songs, more and more,” he says. “Maybe in the past, I wasn’t aware of it, but now, I am. I think doing that has helped me be less hard on myself, which makes you more generous and compassionate in general.”

That helps explain why even if Moreland is reaching out to someone else, there is no judgment. “I’m in the same boat with whoever I’m talking to,” Moreland says.

Moreland’s songs do feel intimate –– like overheard conversations or solitary meditations. “I want to talk one – on – one to someone in a song,” he says. “I don’t want to address a group, really, because I think that’s when it’s easy to start pontificating –– and it gets less honest.”

On Birds in the Ceiling , Moreland’s singing contributes to the feelings of hushed intimacy. Wielding a warm, sandpaper soul voice, Moreland got used to singing loudly as he began playing in bars, fighting to be heard over chattering crowds. “When I first started singing, I was very self – conscious about it,” he says. “I think I tried to affect my voice more. Singing loud could be a security blanket sometimes. On the new album, on a lot of the songs I was definitely making a conscious effort to sing quieter –– almost whisper.”

Produced by Matt Pence and Moreland , Birds in the Ceiling is dynamic: a folk record that refuses to stay in its lane. It’s the second album for Pence with Moreland, who sees the former –– a Denton, Texas – based engineer, producer, and drummer –– as an ideal musical partner. “We have a lot of the same influences, and I have been really influenced by his bands,” Moreland says. “It feels really effortless.”

Album opener “Ugly Faces” establishes the new instrumental ground Moreland is covering: piano and acoustic guitar are joined by drum break and percussive electronic chirps then swells as Moreland’s familiar voice delivers questions, observations, and apologies. “I got used to shutting off part s of myself and feeling like, ‘Well, I’m this kind of artist, so this part of me and that part of me don’t fit –– I’m going to leave them out,” Moreland says of the record’s arrangements. “On this album, I really just wanted to throw that rule out completely . Anything I’m into or that has moved me is fair game.” Cue 90s roots pop: Moreland mentions Sarah McLachlan and Sheryl Crow as influences, then points to the pioneering sampling from the 80s and 90s, as well as the hooks of Janet Jackson. “I feel like I’m old enough now to say, ‘I love pop,’” he says –– then laughs a little.

“Lion’s Den” underscores the pop point: A mathy electronic beat kicks off the song before Moreland’s gorgeous acoustic guitar playing, nimble but lush, sweeps listeners away. The lyric s explore feelings of displacement and connection –– then disconnection. “I think most of the album lyrically is about alienation and isolation –– really about what my wife and I were going through during the pandemic,” Moreland says. “Not really relating to t he pandemic itself so much, but just the circumstances we were both going through with family and friends, which was all colored through this terrifying, dystopian lens.”

Crunchy drum machine claps give way to menacing acoustic guitar on “Cheap Idols Dressed in Expensive Garbage.” Moreland wrote the song after a friend introduced him to a social media account that highlights pastors wearing designer clothes. “It feels like things just continue to get harder for working people,” he says. “It’s hard to afford life these days.”

Moreland points to “Generational Dust” –– a moving portrait of the complicated relationship with roots and place –– as an album favorite. A gentle showcase of Moreland’ s accomplished acoustic guitar playing, “Dim Little Light” taps into the bigness of universal connection and the smallness of individual perspective. While Moreland no longer considers himself religious, the concepts and language picked up during his Bible Belt upbringing emerge in his songs, recast in new, independent musings about self – acceptance, honest questions, and hope –– but never as answers. “ “ At this point in my life, I’m quite comfortable with the mystery of it all,” Moreland says.

“Claim Your Prize” packs a heartbreaking punch, tucked into upbeat guitar strums and a mournful chorus. Moreland’s guitar playing stands out throughout the record. “I wanted to expand my guitar playing on this album,” he says. “I played all the guitars, and I just wanted to approach it with more compositional intent.” The beautiful “Neon Middle June” explores the connection that deepened between Moreland and his wife during the pandemic, when they were “holed up together, home all the time, and it was just weird and lovely.” Pianist John Calvin Abney’s jaw – dropping arrangement and playing happened by chance: He sat down to warm up for the song in the studio, not realizing tape was rolling. The freewheeling, abstract keys perfect the song’s lovely weirdness.

The album’s title track is the graceful closer, pensive, breathtaking, and brimming with hope and gratitude. “The last verse is really about learning not to impose your own essences and projections onto things, and to just let things be what they are,” Moreland says.

Letting things just be what they are is a powerful guiding force for Moreland, determining not just how he interacts with others, but how he treats himself. “When you remove boundaries and instead of holding back parts of yourself –– when you say, ‘Okay, I’ m going to put all of me into this,’” Moreland says, “You end up making music that nobody else could make.”

Joined By The Dead Tongues

When Ryan Gustafson finished recording Transmigration Blues, his fourth and best album under the name The Dead Tongues, in the summer of 2019, he slumped into a month-long haze of depression. For two decades, Gustafson—a preternaturally sensitive soul, interested in the mystic but grounded by his love of quiet woods and open deserts—had made many albums with various bands and under assorted guises. This one however, had left him wounded, momentarily empty. He couldn’t write songs, couldn’t concentrate, couldn’t summon any enthusiasm for tapping into his emotions. Even the shows he played meant going through the motions. “The deeper wells of my being had run dry,” he remembers of how he felt when he returned to his mountain cabin, deep in a North Carolina holler. “There was just this big, open space.”

In the past, The Dead Tongues have been a pragmatically sparse project. All his adult life, Gustafson has been an itinerant sort, whether hitchhiking across the West or simply touring hard. His songs as The Dead Tongues tended toward elemental arrangements that could quickly be stripped onstage to their acoustic essence, should he need to perform them alone. But for more than a year, Gustafson has rented a century-old cabin on a 100-acre spread amid the Blue Ridge Mountains, writing songs in a little triangular greenhouse flooded by light.

This newfound stability, coupled with the wider audience that the tender but troubled Unsung Passage cultivated, allowed Gustafson’s imagination to wander, wondering what his decidedly intimate thoughts would sound like played by an all-star band of collaborators new and old. He invited some of his longtime companions from Chapel Hill’s fertile roots music scene, all of Mountain Man, and a drummer with a separate percussionist. For nine largely sleepless days living and working at North Carolina’s Fidelitorium, they gave these songs everything they had. “I had never had the experience of working like that,” says Gustafson. “It was really trying and completely rewarding, just a huge release.”

From its first notes, when organ and piano peal warmly beneath Gustafson’s strummed guitar, Transmigration Blues summons the sounds of friends supporting one of their own as he works through the annals of existence. Laced with sharp electric leads and a kaleidoscope of harmonies and hand drums, opener “Peaceful Ambassador” celebrates the lows, the highs, and the sense of salvation that singing about both can supply. He taps a surfeit of natural beauty for “Equinox Receiver” — the Badlands and the East River, green forests and golden fields—to show how we’re all suspended somewhere between despair and fulfillment, just trying to do our best with what we have. As his small studio choir joins him, you can imagine an endless audience, joining in this perfect ode to survival.

The album’s epic centerpiece is “Déjà Vu,” a song about trying to find the actual space and air to function with any kind of contentment in these increasingly harried times. It’s a gorgeous, candid confession about the odds we all face just to be happy. Gustafson and the band stretch out for seven minutes, returning for a reprise as if to remind us we’re all in this primitive quest together. “The sky is crowded/with a million lights just trying to get through a darkness/and find a way through,” Gustafson sings at the start of the second verse, his voice quiet from the exhaustion of just being. In the chorus, everyone sings together, lifting one another toward those lights.

The world has changed drastically since Gustafson wrote and recorded these songs — entropy, you may say, has found the freeway. In this stark moment of uncertainty, The Dead Tongues’ hymns to understanding your past and finding renewal in the changing seasons are more vital than Gustafson might have ever imagined. They feel like a homecoming for yourself, a farewell for all the guilt you’ve stockpiled. At a time when admitting that most of us are doing the very best we can seems revolutionary, Transmigration Blues is a welcome statement of radical acceptance.

Make a Reservation for John Moreland with The Dead Tongues